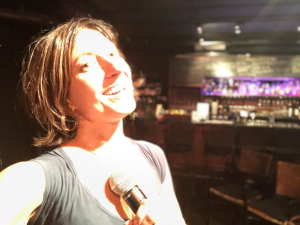 Sold out the first show tonight in Berkeley!!! And I have to say I felt SO GOOD on stage.

I have to admit, it hasn’t always been that way. Sometimes, for years on end, as a performer, I had that need to get on stage – and yet simultaneously a terror of actually being seen. Performing was always a desire, but not always a delight.

In the past, I’d sometimes be an anxious wreck all day leading up to a show, I’d hole myself up like a hermit to conserve energy, I’d feel jittery and tired on my way up to the stage, and then I’d have an amazing time, so in the moment, so ALIVE – but still hearing that inner critic. Still focusing on the ONLY thing wrong – what that guy sleeping in the third row must think or that lady with her arms folded is feeling… why aren’t they laughing more, or why are they talking over there? Even while a show is going great! Feeling some deep restlessness in my body. Like I might die if I actually just let myself be seen here. Like it’s really just not safe to actually relax, to actually enjoy myself, to actually trust.

And something NEW tonight lives in me. Something that’s been building, something I’ve been cultivating for a LONG time, in so many ways. I feel RELAXED and CONFIDENT. Like owning it, for real. I’ve always been able to riff a bit in a moment of something unexpected happening. I’ve always felt ease at dealing with difficulties. Once, a man fainted during a show (it was really hot), I saw him go out, and stopped the show, fed him from my water bottle, and when the EMT’s came, started the show back up. I’m quite good at this.

But tonight is unique. Some folks have a ball, others seem to enjoy it more quietly, but all night I just feel like, “Damn, I’m proud of what I’m up to here!" And pretty much no matter what happens (it's a preview show, so some lights not working yet, mic battery running down, music not yet synched, etc.), YET I still feel this kind of at-home-ness in myself on stage that’s been rare up to now. The feeling that no matter what, "I got this." AND "This is fun!". A sense that, while I’m enjoying giving to this audience, I’m not needing to please them. And that’s an incredible place to arrive at after all this time. And then what an added delight to hear people on the way out sharing that they loved the show.

And what makes the night all the more interesting, is what now seems to be the final test of “not needing to please”. About an hour ago, I get a FB message request that says simply, “I walked out of your show tonight. It sucked.” And so the OUTER CRITIC makes his appearance, and I do feel hurt. It’s not the first time other people have flung their crap in my direction. And there are times in the past when that would have wrecked me. I would have instantly BELIEVED it. I would be a weepy puddle of instability, wanting to disappear into a couple pints of Haagendasz. But just now, I felt into my body and my heart, and I heard, “No, my show didn’t suck, actually. It was awesome.” And this feels like a TRIUMPH of the soul.

I want to reply to this stranger. Of course, I won’t. But I'm curious… did he even READ the description of the show? What about my show (or me more likely) struck SUCH a NERVE, that he not only left, but also found me on facebook and sought out to share the bitterness in his heart. Was it the bright light I shine? The dark shadows I expose? Was it me being a woman on stage? I want to ask whether he’s this mean to his family, or if his family knows he would say something like that to a stranger, or if he even has a family. His profile is just a picture of a cat, so maybe that's his family? Or maybe he's actually a cat, and I didn't do enough catnip jokes?

But so then I was reminded by a couple friends that having THIS level of impact on someone, such that they are this triggered, is also a kind of triumph! There's a motto in comedy, “If you’re not upsetting some people, you’re not being controversial enough.” So, yeah, in this moment, I’m still feeling good. 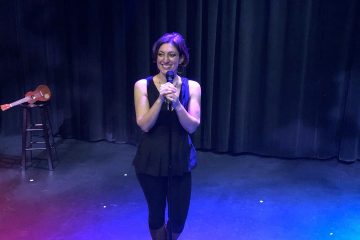