How to Produce Your Solo Show, Step 5 [Set a Date for a Staged Reading] 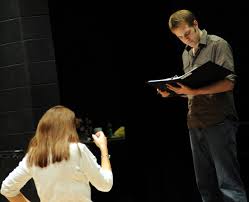 Logistically, this can seem complex. It’s good to set a date far enough into the future that you have time to prepare and make a great show. But it’s important you don’t make it so far away that it becomes an imaginary goal. Generally, one year is too much time to work on a show without putting it up. Three months is too little.

Once you actually put your show on, you’ll likely want to take a step back from it, revise it, and then put it on again. In the software world, agile development is a method of taking things one step at a time, building immediately, and continually reassessing. Using agile development in the context of theater, means beginning faster, failing faster, and succeeding faster.

Next up, we'll talk about finding a venue. Isn't this fun? Whee!! In fact, it's not the most fun part of being a comedian or a storyteller. But it's part of what one has to do until one reaches the level of success where people are doing it for you.