How to Produce Your Solo Show, Step 10 [Memorize the Show, part 1] 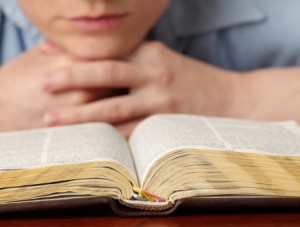 I wanted to be an actor when I was a kid. Really intensely, starting around when I was 8 or so.

But two things stopped me. Or rather, got the way of me thinking I could be successful at it, which in turn had me thing maybe I want to do something else instead.

The first thing that had me think maybe I shouldn’t be an actor when I was a kid was that in the middle of intense scenes, I would get this uncontrollable urge to “break”. Something really serious would be happening, and I would just want to do something totally unreasonable. To shout something tourrette-like. To jump up and wave my arms around. Anything. I didn’t, because somehow my super-ego had taken over already. But that was all I wanted to do.

I figured that breaking character thing would be a very difficult urge to contend with constantly, and maybe there was a better thing I could do, like something else, where shouting, “fire!” in the middle of an intense moment would be more appropriate. That something else I turned to was comedy. Which eventually has brought me back to acting. But I digress…

The second thing that had me think I shouldn’t be an actor was the whole idea of learning lines. It seemed awfully close to something like homework. Frightfully near to real work. Not creative. Not exciting. Not easy. I was a smart kid, but it took me a while to get the hang of reading when I was in kindergarten, and I didn’t want to take on something that would be a constant pain in my ass.

I took an acting class when I was 10, and we were given a commercial to learn about two lines for. The commercial was for Bit o’ Honey candy. I was to do a screen test on camera. For the life of me, I couldn’t get those two lines right. When I was 12, I got a role in the play “Wait Until Dark”. A fantastic role for a kid. And I actually rocked it. But learning the lines was rough. I got my tape recorder and recorded the other side of the dialogue and would run it with myself over and over again. My mom ran lines with me. Of course we rehearsed at the theatre.

A few months later, I had to learn the Hebrew for my Bat Mitzvah. Not only learning lines, but in a whole other language, and with melody. Nightmare. This time I did more of the above, but I also recorded my lines and played them while I was sleeping, hoping to embed them into my subconscious. I looked for any shortcut I could think of.

Needless to say, the idea of a sitcom, or heaven forbid, a soap opera, with even more lines to learn every day, was simply a terrifying idea. Enter, comedy. You can break character any time you feel like it, right? You’re just riffing so you don’t really have to learn a bunch of lines, right? Sadly, no. I wasted 10 years of my life doing comedy that could have been really good (or better than it was at least) had I bothered to memorize my lines. Every time I didn’t prepare, I felt anxious and like some kind of fraud. My nervousness made for a less than awesome show.

Stay tuned for some really good news about memorizing lines… in the next post!

I’m a proud, “out” Jewish American comedian (out as a Jewish person). And I find myself confused after seeing Dave Chappelle’s monologue on Saturday Night Live. I loved the bits about Trump. But I’m talking Read more…