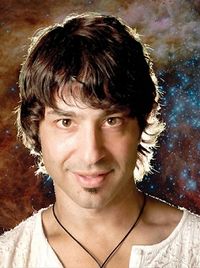 "I used to get high on life… but I built up a tolerance." -Arj Barker

Of course I wrote the title to get your attention. And no, I don't mean take drugs to get high. What I mean is that when we "get high", we let go, and letting go means making more space for play and fun. So, whatever lets you feel that way without drugs* is good for comedy. Of course, doing it with drugs is also good for comedy, but it's less good for life in general.

The more relaxed we are, the more in-touch we are with our true experience and our connection to the source of all ideas and inspiration. We make more absurd connections with our brains. We allow ourselves the freedom and space to play and to enjoy life. We are less in our heads. Less judgmental. Less in the adult ego. Less censoring. Less fear of looking or sounding foolish.

Methods for "getting high":

1) Meditate. Doesn't matter what kind of meditation, as long as it leaves you feeling more expansive, lighter, and clearer than when you started.

2) Dance. Doesn't matter what kind, but you should do a lot of bumping, shaking, and sweating. Jump around enough so all the endorpins start flowing. Dance with other people who are playful. Some of my funniest physical comedy has come out of totally ridiculous scenes I've created on the dance floor, where, for example, I'm acting out the lyrics of a song, or fake-flirting with somone, or trying to look really cool but actually being a total dork. Come to think of it, I realize I was totally under the influence of some a Sid Caeser routine I watched when I was a kid.

3) Improv. Lots of comedians will tell you they had improv comedy as much as they hate clowning. Who cares. Acting exercises, theatrical improvisation, improv comedy, or any kind of movement, like Body Tales, where you let your body tell the story.

4) And I know you're going to think it's crazy, but Laughter Yoga. Now, some Laughter Yoga teachers have that thing where their throats are all tight and they're terrified you won't laugh and they teach at the senior center and they have kazoos and bubbles and rubber chickens to make you smile. I'm not talking like that. I'm talking Laughter Yoga where you do a lot of breathing, some meditation, and you actually let yourself play with other folks and kind of pretend you're a kid again. Laugh at shoelaces. Bark like a monkey. Play air trombone. Seeing the world with innocent, fresh eyes can be so freeing.

5) Hanging out with little kids. Kids under four (and hopefully older) are naturally high. Especially the ones who don't play video games. Spend half an hour really playing with kids, and they'll have you making sock puppets talk in wacky voices and inventing fairy tales. And if you're really lucky, they'll say some wise, candid, hilarious, quotable thing, and you'll get a great new story out of it you can tell at parties for the next year.

*The problem, if you take drugs in order to be funny or relaxed, is that once that works for you, it'll become more and more difficult to do it without.