How to Be Funny, Part 2: Be with People YOU Find Funny 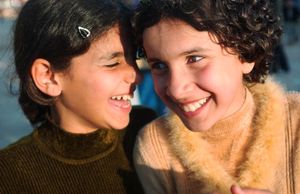 There is a lot of bad comedy out there. And what I mean is that I am very opinionated. I have several scales for funniness when I'm watching comedy. Was it a well-written joke? Was it delivered with great timing? Was it relatable? Did I agree with the view point they shared? Was it a unique idea? I may find certain comics relatable, but not that funny. I may find certain comics skilled in joke-writing and telling, but think they're racist and so I don't find a lot of laughter easily flowing.

Every comic, if they've been developing their craft over time, has (or should have) their own, unique voice. Same thing with friends. It's important to cultivate friendship with and spend time with friends who are:

1. Funny
2. Your kind of funny
3. Have a unique sense of humor, special to them
4. Are inclusive of you when they joke around – you shouldn't feel like you're watching them put on a show on stage for you when you're hanging out. It's important you feel incuded and relaxed around them.

Last night, I was at a family gathering for dinner. My dad was taking a bunch of nutritional supplements as we finished eating. When someoe asked about it, he said, "There are certain diseases that run in the family, and I don't want to get them." Our new British in-law looked at the mountain of pills my dad was swallowing, and said in the most classic example of dry British wit, "I don't want to get them either." (But the subtext of what he was saying was, "I don't want to take all those pills.") I found it hilarious. Guess you had to be there.

Essentially, it's really important to know what makes you laugh and to be with those people–because you find them funny, and not because someone else says they're funny or because it's cool to like them. That will help you truly cultivate the inner flame of your funny.