How to be a Really Funny Comedian, Part 7: Do Your Homework 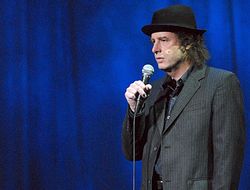 There are lots of ways to study comedy. How you do it is up to you, but that you do it shouldn't be a question. The most embarrasing thing you could do would be to plagarize a joke (or think you were the first to come up with it) at your first big club gig and as you walk off stage, have someone point out that your three minute dentist bit was already done by Bill Cosby 30 years ago. That's why you gotta study comedy.

Another important part of studying comedy is studying "voice." But what's that mean, right?

Take Steven Wright's "voice." You might say, "Well, there's a guy who's kinda depressed, and his humor comes out of being sad." Another way to view his voice would involve examining the mechanism of humor that he's using. For example, Wright uses absurdity as his main mode of humor. He is one of the greatest joke writers of all time, and his humor was continually surprising and clever and genius. It's the kind of humor that inspired me to become a comedian. I once wrote a joke about freeze-dried water, and I was telling it to a fellow comedian who said, oh, like that Steven Wright joke about dehydrated water? Good thing I didn't tell it on stage! I like to think that when that happens, it means we're on the right track. And that perhaps I have some similarities with his sense of humor. When I was younger, I was more interested in absurd humor then I am today, but I still appreciate it deeply.

ACTION: Go to your parents' house and dust off their record player and their old comedy albums. Make sure that you are aquainted with the old comedy as well as the new and that you really have an idea of who wrote what classic bits: Richard Pryor, Robin Williams, Eddie Murphy, etc.

Can you ever recover from bombing on stage? [Part 1]

The Gift of Total Breakdown I recently had a complete breakdown on stage during a comedy show. And it was one of the best experiences of my performing life. I say that because during my Read more…